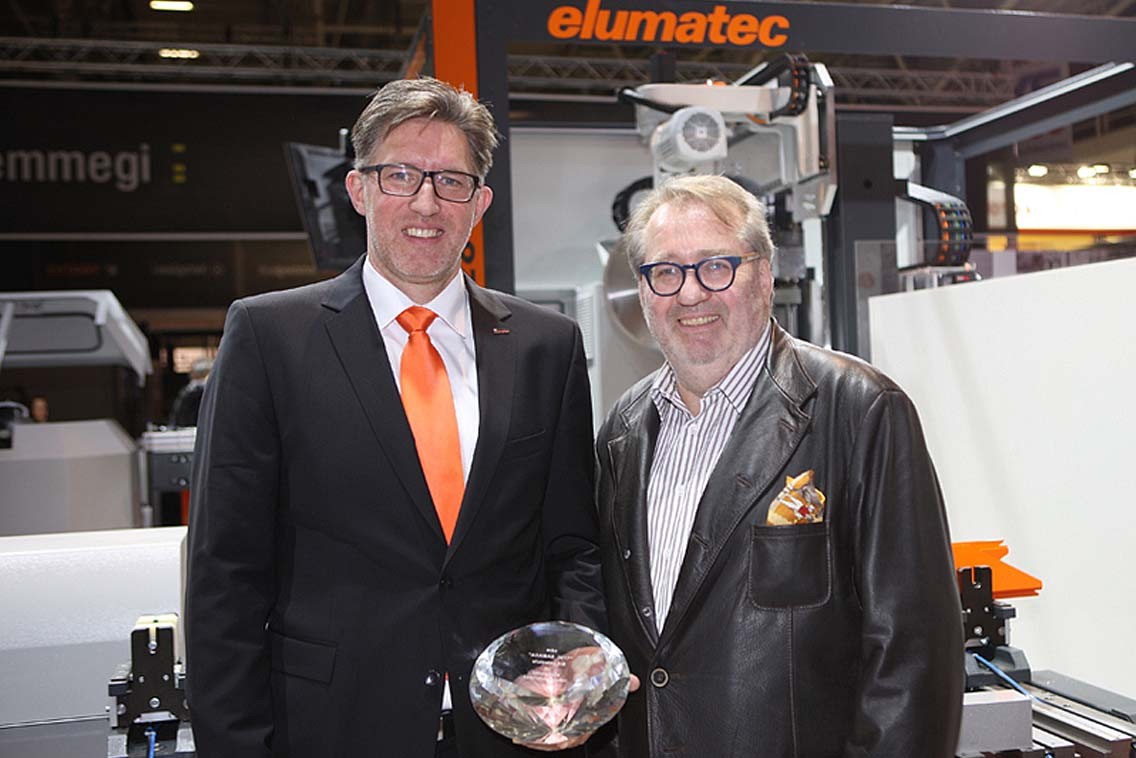 Mühlacker / Munich / Ratingen. 19 January 2017 was the big day. At the BAU trade fair in Munich the Editor-in-Chief of mbz, Karl Ruhnke-Lierenfeld, presented the ADAMAS AWARD 2017 to Ralf Haspel, CEO of elumatec AG. A large number of guests had made a note of the date, and took the opportunity there and then to congratulate this year’s winner of the highly sought-after award. Among the first well-wishers was elumatec board member Britta Hübner, and congratulations were also passed on from Achim Rudolph and Karsten Tiemeyer, board members at Orgadata AG, winner of the ADAMAS AWARD in 2012.

The “ADAMAS AWARD” is a special award given to businesses who lead the way with their exemplary business culture. The award recognises the service provided by employees and management working together and the resultant success of the business as a whole. The decision on who wins the award is based on an assessment of a business’s “soft skills”, such as the ability of employees and management to work in a team and their motivation.

The “ADAMAS AWARD” does not reward specific high achievement. Instead, it recognises a business and all its employees as a community of service providers, which involves paying particular attention to the management team responsible for the business. In his speech, Editor-in-Chief Karl Ruhnke-Lierenfeld explained the reasons behind the decision to give the award to elumatec AG. 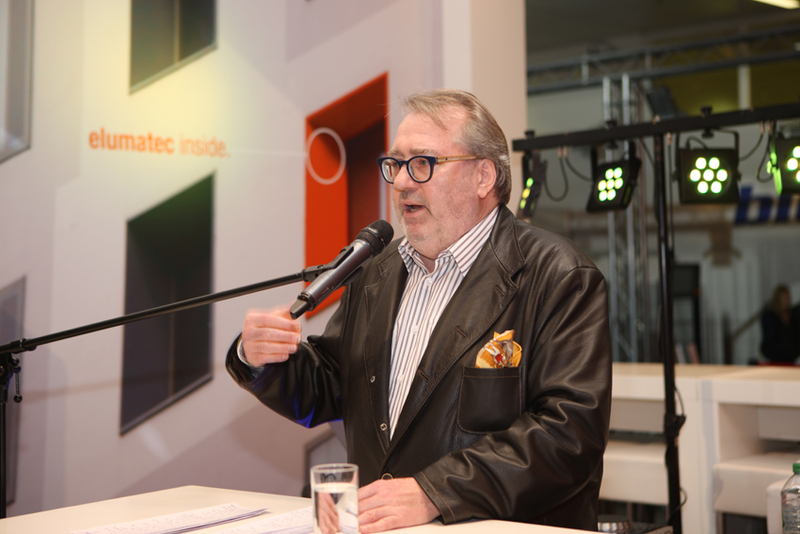 The rumours spread. A staff meeting had been called for the afternoon. You could have cut the atmosphere in the packed hall in Mühlacker-Lomersheim with a knife as over 400 employees waited for the latest news. On 26 July 2013 it became official: elumatec, the Swabian family businss founded in 1928, had filed for insolvency that morning. No-one among the workforce knew what would happen next. The administrator did not attempt to hide the seriousness of the situation, but he also gave the elumatec employees reason to be optimistic.

He had every confidence that a sustainable, long-term solution could be found for the employees at Mühlacker and for the elumatec group. His confidence was based on the fact that the core elumatec business was not one of the reasons for going into insolvency. The first step was to focus all activities on convincing customers and suppliers that elumatec remained a reliable partner who would continue to fulfil all orders to the letter and with the same high quality. The management team, workers’ union and employees were united in their efforts to justify the administrator’s confidence. And he was proven right: Two months later he and the elumatec management team announced at another staff meeting that the restructuring of the business was progressing well – so well that backlog of orders had actually increased after filing for insolvency and that elumatec was once again able to finance all its domestic and international business activities from its own pocket. Furthermore, all working relationships remained unchanged for the time being. The local press headline ran: “450 employees breathe a sigh of relief”.

More good news was soon to follow, as even before insolvency proceedings were officially opened on 1 October 2013 elumatec began the process of hiring staff for new roles and apprentices in various sectors of the business. As of October, elumatec was once again able to pay all wages and salaries out of its own pocket. It should not be forgotten at this point that the loss of around 50 jobs in the course of the insolvency eventually proved inevitable. Beginning on 1 January 2014, the employees affected received further training at a transfer company, for which a period of up to twelve months per person was planned in accordance with the maximum time limit allowed. I think this speaks volumes for the sense of responsibility that elumatec feels towards its employees!

Throughout the crisis, business management behaved in an exemplary manner as regards keeping employees informed. Regular staff meetings and information sessions were held to keep staff up to speed on all the important developments affecting their business as soon as they occurred. Task forces for individual issues were created, and the circa 300 elumatec employees abroad were kept in the loop via email newsletters and invitations to visit company headquarters. Once the insolvency was over, elumatec went to great efforts to professionalise its public image, revive the brand and introduce a new corporate design. The first official appearance, at the FENSTERBAU FRONTALE trade show in Nuremberg in March, was a great success, and the new exhibition concept and design met with great acclaim among the paying public.elumatec’s new image also won over industry professionals, and praise poured in: “More dynamic, more modern, more clear, more positive and above all more confident – but still down-to-earth and not excessive”. What an accurate description that is – and that goes for the business as a whole too!

elumatec has always recognised the obvious value of regular communication with customers and partners. In the second half of 2014 the new customer magazine “360°” was published for the first time. elumatec CEO Ralf Haspel – then Head of Sales and Marketing – wrote in the introduction to the first issue: “The trust that our customers and business partners have placed in elumatec over the past few months has really made an impression on us. It’s the incentive for all employees to go the extra mile to provide outstanding service and develop new, innovative products in future. All our efforts are focused on this, in the knowledge that there is always something that can be improved.” 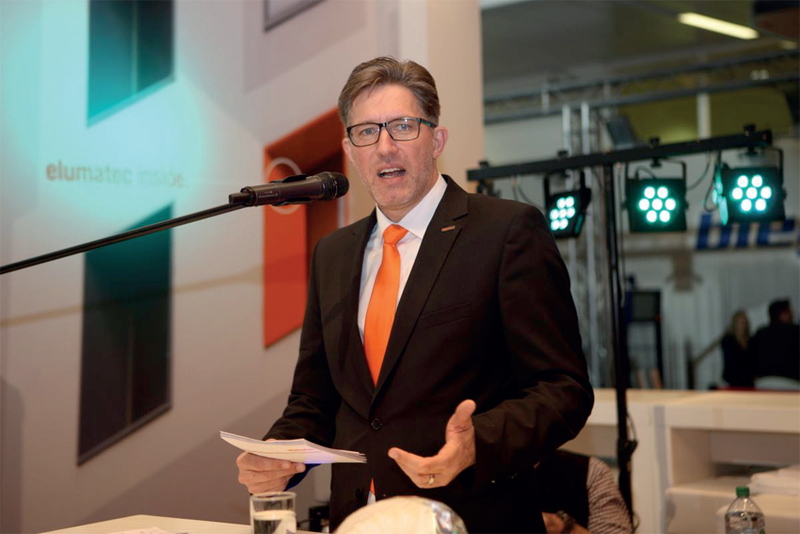 Ralf Haspel accepting the ADAMAS AWARD. He thanked everyone at elumatec AG for their dedication and commitment, and in keeping with the spirit of the award he dedicated it to all the employees, saying that they “have played an enormous part in ensuring that this family-run business can look forward to a successful future”.

“We have to be more open and accessible to our customers.” Following this directive from Ralf Haspel, the first elumatec Tech Days were held in autumn 2015. More than any other step taken in the last few years, it was they that helped build customer trust in the business. Three days of live demonstrations, presentations of new machinery, factory tours and the chance to discuss technical matters with technology and application specialists made Mühlacker a real hotspot of professional profile machining. The slogan for the events was “stronger and closer together than ever before”, and they attracted around 800 visitors from all corners of the globe – including Alaska, China and South America – to elumatec’s headquarters at Mühlacker. The aim of the Tech Days was to provide customers with “insight and inspiration”, and to give them the chance to get to know the people behind the products. This was a real boon, particularly for elumatec employees. After all, when else can you talk to so many customers face to face and get direct feedback on your work?

Just over a year ago, in mid-January 2016, elumatec AG made headlines again in Germany and abroad. “An Italian parent company” and “Industry solution secures survival”, ran the headlines as Italian holding company Cifin completed a takeover of the entire elumatec group. In addition to Keraglas and Tekna, Cifin’s portfolio also includes Emmegi, a business which, like elumatec, produces machines, systems and software for profiling aluminium, steel and PVC. All those involved in the takeover viewed it as another important milestone and the perfect springboard for embracing a positive, successful future. In January, then CEO Britta Hübner said: “Our restructuring plan has been a complete success. elumatec can now focus all its efforts on playing an active part in the global market, without the burdens of the past.” Despite being incorporated into Cifin, elumatec continues to trade independently as the largest business within the group. In July 2016 Ralf Haspel became CEO of elumatec AG, and in November 2016 elumatec and the German Industrial Union of Metalworkers signed a collective wage agreement for the first time. The result of fruitful, constructive negotiations and ballots involving business management and the workers’ union, the agreement created an equal playing field for all employees. Those who took part in the negotiations were unanimous in their praise of the “good working environment”, which says a great deal about the positive business culture fostered by elumatec.

Of course, it should not be forgotten that managing insolvency is a long-term process. “We have successfully made a great number of changes externally”, Ralf Haspel told me, “but it is a very difficult and challenging task to replicate those changes internally.” Breaking up the old family structures which had been established for decades, overcoming the previous reticence shown towards the public, creating transparency, implementing new recruiting demands... in short: launching and seeing the change process through, while ensuring that all your employees are with you every step of the way, is by no means an easy job! On the one hand, he said, it is hugely rewarding to see how many colleagues have “blossomed” in the last three years and developed into true pillars of the business; on the other, after the insolvency there was naturally great uncertainty among many employees. The takeover was criticised by some, and many employees struggled to adapt to the new style of business management. But as Haspel says, “the multitude of initiatives and measures we have taken in the last three and a half years show that we are only moving in one direction!”

With Haspel at the head of the new management team, elumatec is now focusing on continuing the process of integration into the Cifin group and harnessing the synergies created by the takeover. Their cooperation is viewed as very positive and mutually beneficial by those involved, even if, as Mr Haspel conceded with a knowing wink, there are occasionally “cultural differences when it comes to finding solutions”.

The development of new products and services is proceeding apace. Among the latest innovations is the new “eluCLOUD” range of software. Designed to work with elumatec machines, it offers a level of performance and services for customers which the industry has never seen before. Comprehensive machine data acquisition and analysis capabilities provide increased convenience in terms of service and maintenance; whether at the machine or in the office, the customer gets an overview of the data obtained. Numerous other machine upgrades are part of the innovation strategy – the new generation of controllers for the SBZ 151, for instance, or the completely remodelled SBZ 130/131 range, on which work was finished just a few weeks ago. With numerous improvements to tiny details on the one hand and yearly large-scale innovations on the other, it’s no wonder that the word “obsession” is used to describe how this Swabian family business continuously seeks to optimise its products and services for its customers. elumatec certainly aims high: by 2021 the plan is to have completely revolutionised its range of products and added several new standout innovations.

- Today, elumatec AG has subsidiaries and dealers in over 50 countries, serving over 28,000 customers and employing 720 employees around the world. 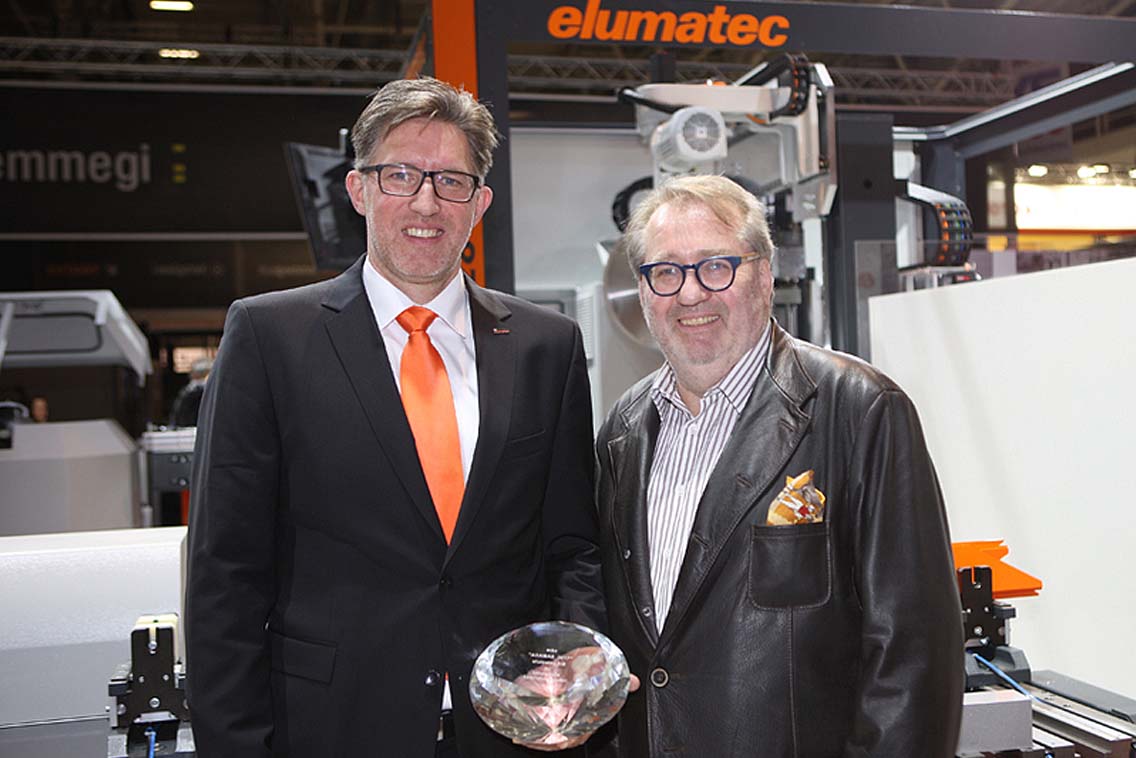 Ralf Haspel, CEO of elumatec AG, together with mbz Editor-in-Chief Karl Ruhnke-Lierenfeld with the ADAMAS AWARD 2017